Last weekend, Brooke Reed and her PAL Lady Stars (green team) participated in the 2014 Heat Wave Lacrosse Tournament in Flagler Beach, Florida.  This annual event is the State of Florida’s premier 7 versus 7 lacrosse tournament for Middle School and High School aged girls.  The PAL Lady Stars (green team) participated with 11 other teams in the Gator Division.  They played two games Friday evening (July 11th), returning to play an additional two preliminary, placement games on Saturday morning, where they improved to 4 – 0 going into the playoffs on Saturday afternoon.  Brooke had an astonishing 22 goals in the first 4 placement games to lead her team in scoring:

During the three playoff rounds, the PAL Lady Stars (green team) performed well during the quarter and semi-final games, only to be outscored in the final Championship Game to finish 6 – 1 and take second place for the tournament.  The playoff results are as follows:

Brooke Reed completed the fast paced 7 on 7 Heat Wave Lacrosse Tournament with a total of 27 goals and established herself as a key player to the tournament along with her teammates.  This was also Brooke’s last lacrosse tournament for the 2014 Summer season.  Look for more news in the coming weeks on the next sporting events for Brooke Reed Sports. 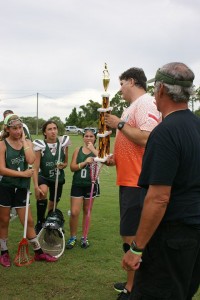 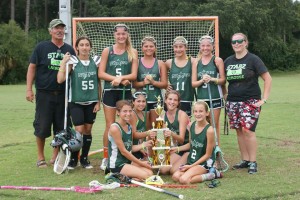 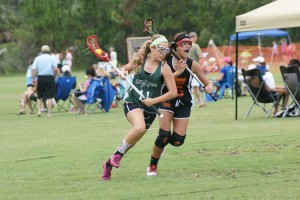 Brooke cradling the ball during one of the Heat Wave tournament games.