This past Monday evening (March 31st) kicked off the 2014 regular season for the St. Johns Count Police Athletic League Lady Stars Lacrosse League.  Playing for the senior girls, Brooke, #11, played her regular position as mid-fielder (middie) during the game.  The game started off as a close match and continue most of the game that way for each team which traded goals back and forth.  Brooke scored her first goal early in the first half and added one more a few minutes later.  Scoring two more goals in the second half, Brooke finished high scorer for her team making a total of 4 goals during the game and helped her team to an 11 – 9 win.  In addition to scoring 4 goals, Brooke recorded several ground balls that resulted in turnovers for the other team and continued possessions for hers.

The following video features Brooke’s second goal of the game where she receives a pass from behind the goal from her teammate Natalie and makes a play-fake to rush the goal and shoot and score.  Stay tuned for more game results and activities of the 2014 St. Johns PAL Lady Stars Lacrosse season and Brooke’s game performances. 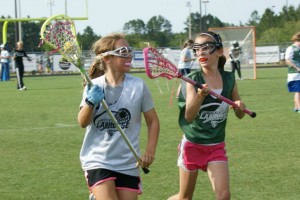