This past Saturday, Brooke and her St. Augustine Police Athletic League (PAL) flag football teammates started the 2015 Winter season with the first of 8 games being played weekly for the next two months.  Playing for the ACC Tigers 6th and 7th grade team, Brooke completed three touchdown passes as quarterback and recorded one interception as safety, in a 27 – 0 win over the ACC Seminoles to start the season 1-0.

Brooke also begins regular season basketball play for the Sebastian Middle School Eagles on Wednesday, January 7th, when her Eagles team opens the regular season at home against the Pacetti Bay Wildcats, in the first game of a 9 game season.  As a 7th grader, Brooke is a returning starter for the Eagles, having played guard last year.  Good luck to Brooke and her teammates, and stay tuned for 2015 season updates and game results. 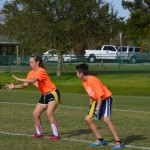 Brooke takes a snap before the play 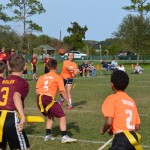 Brooke completes a TD pass to her receiver Cooper